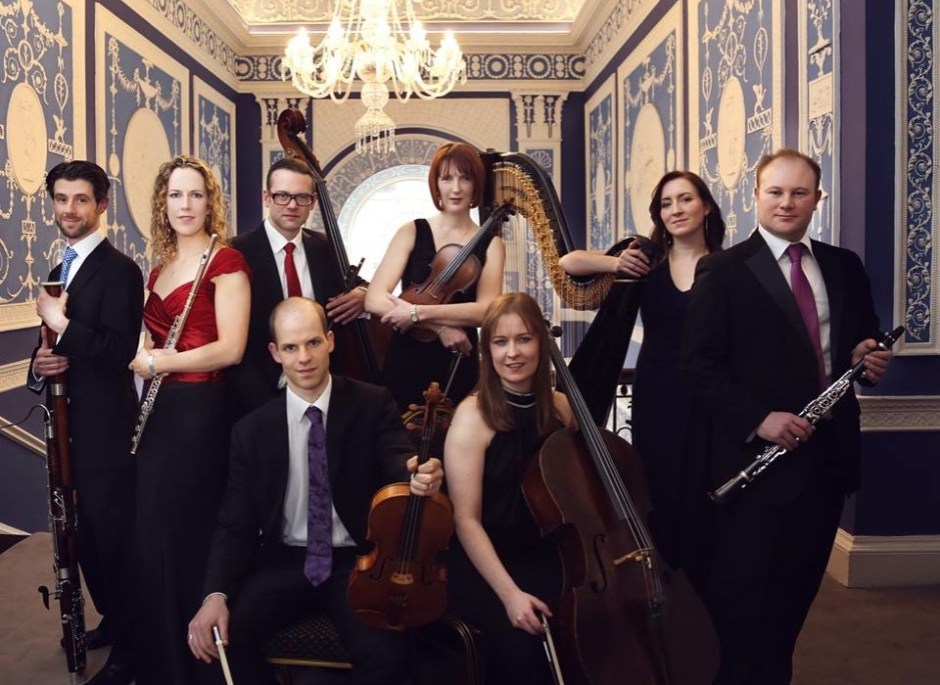 Ficino Ensemble was formed by Nathan Sherman in 2012 as a flexible chamber music group that performs all the great music for small ensembles, ranging from string trios to works written for larger groups. For our concert, five esteemed soloists from this exciting new ensemble perform works by Brahms, Rozca and Glass.

Online booking is not closed. Tickets can still be purchased at the venue prior to the concert. Box Office opens at 7:15 p.m.

Ficino Ensemble’s aim is to perform works that appeal to a discerning audience whilst championing lesser known works that deserve to be appreciated. To date, they been invited to play for President Michael D. Higgins, Howth Chamber Music Series, Music in Kilkenny Series, Hugh Lane Sundays@Noon Series and the Irish Georgian Society, and their concerts have been described as exciting and intimate with a high calibre of ensemble playing. The members of the group are recognized in Ireland and abroad as soloists and chamber musicians.

Mia Cooper studied at the Royal Northern College of Music with Yossi Zivoni and has been involved in a wide variety of music making in the ten years since. She was principal first violin of the Royal Philharmonic Orchestra for five years, and also regularly plays and records with London’s chamber orchestras and ensembles, including the Fibonacci Sequence, Barbican Trio, Brodsky Quartet, Chamber Orchestra of Europe and Academy of St Martin-in the-Fields. Mia has been a guest leader of the CBSO, and BBC National Orchestra of Wales and before moving to Dublin, spent three summers leading the St Endellion Orchestra.

Mia teaches violin at the Royal Irish Academy of Music. She was appointed leader of the RTÉ Concert Orchestra in 2006.

Lynda O’Connor is one of the leading Irish violinists of her generation. Showing early promise, she made her début appearance at the National Concert Hall, Dublin when she was just four years old. In demand as a chamber musician Lynda has collaborated with such wonderful artists as Michael Collins, Richard Watkins, Barry Douglas, Chee Yun Kim, Andreas Diaz, Nobuko Imai, Sharon Shannon, Frankie Gavin and Dr. Carol Leone. In 2012 she launched the ‘Belisama piano trio’ with cellist Ailbhe McDonagh and pianist Orla McDonagh. Lynda enjoys all genres of music and in September 2013 joined the world-renowned Trio Elatha. They fuse traditional Irish folk music with a classical flavor. They look forward to making their first album later this year. In demand as an orchestral artist and leader, Lynda has performed with all the Irish orchestras including the Irish Chamber Orchestra, Camerata Ireland, The Wexford Opera Orchestra, as well as other groups throughout Ireland, Europe and the USA.

A native of the USA, Nathan Sherman (viola) has been based in Ireland since 1999, and studied at the Royal Irish Academy of Music with Elizabeth Csibi and John Lynch, where he graduated in 2005. Since that time, he has enjoyed an adventurous career both as a performer and as a teacher. He was a member of the European Union Youth Orchestra for several years, which offered him the opportunity to work with some of the world’s leading conductors and soloists. Nathan went on to study with Paul Silverthorne at the Royal Academy of Music London, and with Ashan Pillai at the Escuela Superior de Musica Catalunya in Barcelona. He has toured extensively throughout Europe, China, Kazhakstan, and the USA, and has played at some of the world’s finest concert halls with the EUYO, European Union Chamber Orchestra, and Camerata Ireland.

As a soloist he has given recitals throughout Ireland and the UK, and is especially interested in contemporary composers. He has performed solo works by Ligeti and Schnittke, and in 2006 premiered Ian Wilson’s Apparitions with the Royal Irish Academy of Music Percussion Ensemble in Brooklyn College, New York. He is currently working with Kevin O’Connell on a work for solo viola which will be performed in 2015. At home in Ireland, he is in demand as an orchestral player, and regularly plays with the RTÉ National Symphony Orchestra, RTÉ Concert Orchestra and Camerata Ireland. His love of baroque music led him to do an intensive baroque course with Monica Hugget, and he has since performed with the Irish Baroque Orchestra and Camerata Kilkenny. His main passion is chamber music, and he is the founder of the Ficino Ensemble.
​
Nathan plays on a viola made by Joseph Curtin and is grateful to Music Network for funding his Gary Leahy bow.

Irish cellist, Ailbhe McDonagh, performs throughout Ireland and internationally as a soloist and chamber musician. A graduate of the Eastman School of Music, Rochester, NY, and the Royal Irish Academy of Music, Dublin, Ireland, she studied with world-renowned cellists Steven Doane, Nora Gilleese, Aisling Drury-Byrne and William Butt. McDonagh gave her debut recital with celebrated Irish pianist John O’Conor at the National Concert Hall in Dublin, Ireland. Over the last ten years, she has performed throughout Europe, Asia and the USA and has appeared as a concerto soloist numerous times all over Ireland and abroad. Performances include concerts at Carnegie Hall, the Yale Norfolk Festival, Schleswig Holstein Music Festival, Great Irish Houses Festival, for the Irish President at Aras an Uachtarain and on Irish national television and radio. She has recently formed a new duo, The McDonagh Sisters with pianist Orla McDonagh. Keenly interested in contemporary music, McDonagh collaborates with several composers and other artists worldwide, most recently recording a CD of contemporary music for Bridge Records in New York.

A composer and arranger in her own right, she has had several piano compositions published for the RIAM Local Centre Examinations. McDonagh joined the cello faculty of the RIAM in 2010. Upcoming engagements include performances with her new piano trio The Belisama Trio and a tour of Ireland with her classical/traditional crossover group, Trio Elatha along with other solo recitals. McDonagh’s debut CD called “It’s a Cello Thing” was released on 27th April 2012 and was named “CD of the Week” on RTE Lyric FM.

Macdara Ó Seireadáin (clarinet) is a native of Dublin,and a First class Honours graduate of both Hochschule für Musik und Theater Hannover and the Royal Irish Academy of Music, where he studied with Johannes Peitz and John Finucane respectively and was also awarded the Briscoe Cup by the Royal Irish Academy of Music for outstanding student of the year in 2008. Already a multiple prizewinner both internationally and in the Feis Ceoil, in October 2010 Macdara was unanimously awarded first prize in the inaugural Irish Freemasons Young Musician of the Year competition and went on to perform with John O’ Conor at his celebrity concert in the NCH in April 2011. In 2013, on the personal invitation of Gustav Kuhn, Macdara recently joined the orchestra of the Tiroler Festspiel Erl, Austria, as principal clarinet.

As soloist he has performed with the RTÉ National Symphony Orchestra of Ireland, RTÉ Concert Orchestra and Kammerorchester Uelzen and frequently performs as an orchestral musician with both of the RTÉ orchestras as well as the Deutsche Kammerphilharmie Bremen, Camerata Ireland, Philharmonisches Orchester Kiel, Crash Ensemble and the Hannover Staatsoper. A keen chamber musician he has performed with the Apollon Musagete Quartet, John O’Conor, Ailish Tynan, Sharon Kam, Tara Erraught and Martina Filjak and has given concerts and masterclasses in Europe, North America and China. He is also a founder member of the Hannover based Magenta clarinet ensemble, with whom he regularly performs throughout Germany. Upcoming plans include a collaboration with a film studio in India, which will include recitals in Boston, Chennai and Bangalore. Macdara wishes to publicly acknowledge the generous financial support of the Arts Council who awarded him a Travel and Training Bursary in both 2010 and 2011 and also that of the Bank of Ireland who selected him as a Millennium Scholar in 2008.