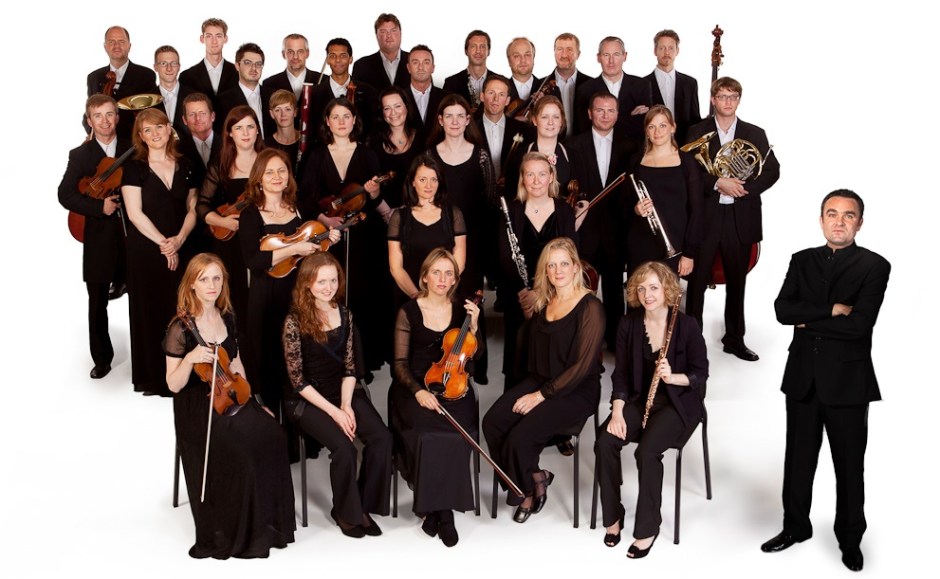 SPOTLIGHT: Jörg Widmann and the ICO bring their irrepressible energy and insight to a thrilling programme featuring works by Tchaikovsky, Puccini and Stamitz, plus a new work by Irish composer Sebastian Adams. The acclaimed British clarinetist Katherine Spencer is the guest soloist.

SPOTLIGHT
This programme puts the spotlight on a new work by the up-and-coming Dubliner, Sebastian Adams, currently blazing a trail as a composer and viola player of repute, with a passion for contemporary music. His exciting new work explores the possibilities of the individuals in the orchestra as much as the instruments they play. Puccini’s Chrysanthemums was written as an elegy in response to the death of the Duke of Savoy. This beautifully poignant movement was also included in the death scene of Puccini‘s opera Manon Lescaut. Johann Stamitz pioneered the use of wind instruments as a permanent part of the orchestra. His Clarinet Concerto was an early milestone in the development of the genre, and Jörg Widmann has invited Katherine Spencer into the spotlight, to show off the vast technical and lyrical capabilities of her artistry, and the instrument. The final spotlight is on Tchaikovsky’s gorgeous Serenade for Strings, one of his most enduringly popular works. This, combined with the irrepressible energy and insight brought by Widmann and the ICO, has all the makings of an unforgettable performance!

“Widmann’s energy doesn’t seem to have any boundaries, he simply motivates everyone around him, be it the hard working shining brass, the zippy violins or the juicy explosions in sound.” Rhein-Neckar Zeitung

Clarinetist, composer and conductor Jörg Widmann is one of the most versatile and intriguing artists of his generation. The 2017/18 season will see him appear as soloist with orchestras such as Wiener Philharmoniker under Valery Gergiev, Helsinki Philharmonic Orchestra with Bertrand de Billy, Yomiuri Nippon Symphony Orchestra under Sylvain Cambreling, City of Birmingham Symphony Orchestra under Mirga Gražinytė-Tyla, SWR Symphonieorchester under Peter Rundel, and Orchester de Paris with Daniel Harding.

This season will also see Jörg Widmann and his work featured in various residencies and portraits. Jörg Widmann is the first Gewandhaus Composer and was commissioned by Gewandhaus Orchester and Boston Symphony Orchestra to compose a new work which will be premiered in Leipzig in March 2018 conducted by Andris Nelsons. At Gewandhaus, Jörg Widmann will be featured in a portrait concert as well as in various chamber concerts and as a soloist. Further residencies include Orchestre de Paris, Wigmore Hall, City of Birmingham Symphony Orchestra, Mozartwoche Salzburg and Philharmonie Essen.

Chamber music performances in the 2017/18 season include a tour with the Hagen Quartet with performances of his new Clarinet Quintet in Paris, Lugano, Amsterdam, Essen, Berlin, London and Salzburg; trio recitals with Tabea Zimmermann and Dénes Vàrjon in Helsinki, Freiburg, at Kölner Philharmonie, Pierre Boulez Saal Berlin and Wigmore Hall, and recitals at San Francisco Performances, Toppan Hall and the premiere of a new piece written for him by Mark Andre at Wittener Tage für neue Kammermusik. Amongst his regular chamber music partners are renowned soloists such as Sir András Schiff, Daniel Barenboim, Elisabeth Leonskaja and Mitsuko Uchida.

Continuing his intense activities as a conductor, Jörg Widmann will perform this season with the Symphonieorchester des Bayerischen Rundfunk, Budapest Festival Orchestra, Rundfunk-Sinfonieorchester Berlin and as Principal Conductor with the Irish Chamber Orchestra with whom he will embark on a tour throughout Germany including concerts at International Music Festival Heidelberger Frühling, Philharmonie Essen, Mozartfest Würzburg and Leverkusen, followed by the premiere of his new violin concerto with Tokyo Metropolitan Symphony Orchestra and Carolin Widmann at Suntory Hall. 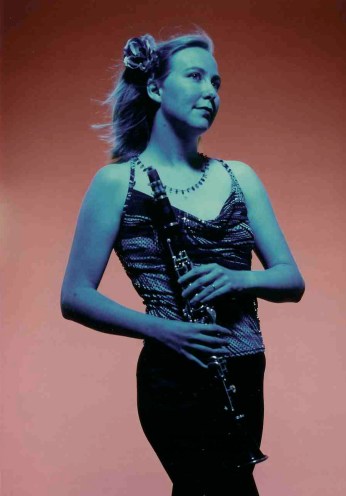 Clarinettist Katherine Spencer made her concerto debut at the age of fourteen at the Royal Festival Hall and has since performed there as concerto soloist a further three times.

She has also appeared as soloist with the BBC Symphony Orchestra, The Academy of St Martin in the Fields Orchestra at the Barbican Centre and at the Birmingham Symphony Hall and Queen Elizabeth Hall, made many live Radio 3 solo broadcasts, and performes regularly on Classic FM and European radio stations.

She has recorded the Brahms Sonata and Beethoven Trio for the Oxford Classic label with Sam Haywood and Martin Storey. She has also recorded a number of CDs with the Galliard Ensemble, of which she is a founder member, which have received high acclaim in leading magazines such as the Gramophone magazine.

As a chamber musician Katherine has performed Mozart with the Amadeus Quartet in the presence of HRH the Emperor of Japan. She continues to perform internationally with her ensembles Ragnaroks and the Galliards in Festivals such as the BBC Proms and the Barbican’s “Mostly Mozart Festival”.

Katherine currently divides her time equally between solo, chamber and freelance orchestral work, both as a member of the OAE and as a modern principal clarinettist of City of London Sinfonia. She is particularly interested in contemporary mediums and works closely with Artist Ashley Davies in many experimental crossover Art/Music projects, most recently in the Southbank centre.

She regularly leads workshops from traditional concert formats to more individual music therapy style sessions in many special needs schools. She continues to give masterclasses and workshops in clarinet playing and workshop leading in Britain’s leading music colleges and institutions.

The Irish Chamber Orchestra (ICO) is Ireland’s finest chamber orchestra, combining high quality performances with an expansive artistic vision. Virtuosic, innovative and creative, the ICO blazes a trail with its unique collaborative approach and its rich relationships with an array of creative partners.

The ICO continues to work with Jörg Widmann (Principal Conductor/Artistic Partner) who continues to expand audiences, at home and abroad, with his vision. Under the leadership of Katherine Hunka, the orchestra is one of Ireland’s busiest touring ensembles, both nationally and internationally.

In 2017/18 Jörg Widmann turns his attention to the music of Schubert and Schumann, alongside his own innovative works. The ICO firmly believes Widmann’s approach to be the way of the future for classical music, and is confident that he will continue to shape and develop the orchestra with his artistic insight and brilliance.

The ICO opens its season with Benjamin Britten’s Owen Wingrave, partnering with Opera Collective Ireland. The orchestra collaborates with some of the finest international guest soloists in its 2017/18 season. Maestro Gabor Takács-Nagy makes a welcome return in September with Alex Petcu as featured soloist. Jörg Widmann re-introduces his sister, the violinist Carolin Widmann who performs Mendelssohn’s great violin concerto. In between, bassoonist-turned-conductor Peter Whelan conducts the orchestra for the first time, on a Bach tour. We welcome back the very popular Mullingar-born soprano, Ailish Tynan for a festive feast of favourites. In 2018, Jörg Widmann welcomes back the aerial dance troupe Fidget Feet, who will perform with us at home, and for the first time in Germany. We anticipate our first collaboration with the legendary Elisabeth Leonskaja – whose artistry is nurtured by roots deeply embedded in the famous Russian-Soviet school of pianism. Leonskaja will perform with ICO for the first time in Ireland, and thereafter in Essen and Heidelberg.

As ever, Irish composers are very much to the fore, and this season the orchestra performs a newly commissioned composition for Percussion and Strings by Cork-born composer Sam Perkin (funded by the Arts Council). The orchestra enjoys fruitful relationships with an array of Irish composers including Garrett Sholdice, John Kinsella, Linda Buckley, Elaine Agnew, Míchael Ó Súilleabháin, Frank Corcoran, Ian Wilson, and with UK composer Tariq O’Regan.

The orchestra has successfully toured across Europe, Australia, South Korea, China and the US. Since his first appearance with the orchestra (Berlin 2007), Jörg Widmann has injected unprecedented energy which has seen the orchestra appear at prestigious festivals and venues throughout Europe. In February 2017, the ICO and Jörg Widmann performed in Blaibach, Neumarkt, Brussels and Freiburg with great success. In March, the orchestra made its debut at the Konzerthaus Vienna to great acclaim, before returning to Heidelberg for the 2nd year of its international (3-year) residency there, at the distinguished Heidelberger Frühling Festival. In 2018, the Irish Chamber Orchestra performs in Leverkusen and Essen, before returning to Heidelberg to complete its residency there. The orchestra returns to Würzburg’s prestigious Mozart Festival in June.

Adding to the orchestra’s already numerous CD recordings, the Orfeo label has just released the second of a series of three CDs of Mendelssohn’s Symphonies combined with works by Jörg Widmann, as directed by him. Outside the concert hall, the Irish Chamber Orchestra inspires and supports communities with a vitality unmatched by other ensembles. Its Sing Out with Strings initiative provides free tuition in singing, song writing, violin, viola, cello and bass to 300 children throughout Limerick city – developing key life skills by using music as a tool for tangible social change.

The Irish Chamber Orchestra is resident at the Irish World Academy of Music and Dance at the University of Limerick. The orchestra is generously funded by The Arts Council of Ireland/An Chomhairle Ealaíon. Additional support from Culture Ireland contributes significantly towards the ICO’s international touring initiatives.