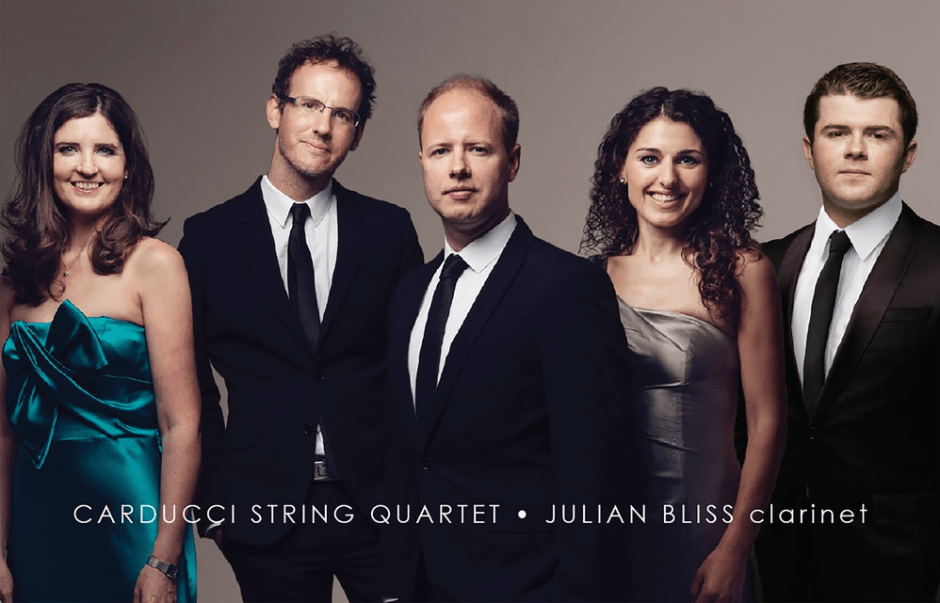 The highly acclaimed Anglo-Irish Carducci String Quartet joins Julian Bliss, one of the world’s finest clarinettists, for a thrilling programme featuring immortal works by Haydn and Brahms, plus David Bruce‘s Gumboots Clarinet Quintet, “an engaging new work which deserves a place in the chamber repertory” (Gramophone).

David Bruce and members of Ensemble ACJW prepare for a performance of Bruce’s “Gumboots.” 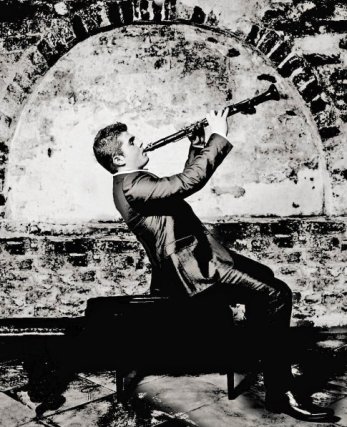 Julian Bliss is one of the world’s finest clarinettists, excelling as a concerto soloist, chamber musician, jazz artist, masterclass leader and tireless musical explorer. He has inspired a generation of young players as creator of his Conn-Selmer range of affordable clarinets, and introduced a substantial new audience to his instrument. Julian started playing the clarinet aged 4, going on to study at the University of Indiana and in Germany under Sabine Meyer.

In recital and chamber music he has played at most of the world’s leading festivals and venues including Wigmore Hall and Lincoln Center. He has appeared as soloist with a range of international orchestras including São Paolo Symphony, Chamber Orchestra of Paris, Auckland Philharmonia, BBC Philharmonic, London Philharmonic and Royal Philharmonic orchestras.

In 2010 he established the Julian Bliss Septet, inspired by Benny Goodman, and released the first Septet album in 2012. They have performed to packed houses at Ronnie Scott’s (London), the Concertgebouw (Amsterdam) and across the USA, including Jazz at Lincoln Center, and have gone on to explore the music of Gershwin and his Tin Pan Alley contemporaries.

Album releases include his recording of Mozart and Nielsen’s concertos with the Royal Northern Sinfonia. His latest chamber discs include David Bruce’s Gumboots for clarinet and string quartet, plus the Mozart and Weber quintets, with the Carducci Quartet. Recent highlights include concerto performances with the Northern Chamber Orchestra, BBC Philharmonic and Royal Liverpool Philharmonic Orchestra, an extensive US tour with his septet, and concerts with the Carducci Quartet.

Described by The Strad as presenting “a masterclass in unanimity of musical purpose, in which severity could melt seamlessly into charm, and drama into geniality″, the Carducci Quartet is recognised as one of today’s most successful string quartets.

An internationally renowned Anglo-Irish string quartet based in the UK, the versatile and award-winning Carducci String Quartet has performed everything from brand new quartets, classic works by Haydn, complete Shostakovich cycles, and even partnered with folk-rock icon Ian Anderson of Jethro Tull. Founded in 1997 around the talents of Matthew Denton (violin), Michelle Fleming (violin), Eoin Schmidt-Martin (viola), and Emma Denton (cello), the quartet has won numerous international competitions, including Concert Artists Guild International Competition 2007 and First Prize at Finland’s Kuhmo International Chamber Music Competition 2004. In 2016, they took home a Royal Philharmonic Society Award for their performances of cycles of the complete Shostakovich Quartets. This Shostakovich15 project was accompanied by a recording of quartets no. 4, 8 and 11: their second disc for Signum Classics, and it was recognised by BBC Music Magazine as “a fine achievement, boasting excellent ensemble, musical insight and sensitive attention to detail”. The quartet has released a bevy of acclaimed recordings on their own label, Carducci Classics, as well as Signum Classics. Their Naxos recordings of Philip Glass Quartets have had over six million plays on Spotify. 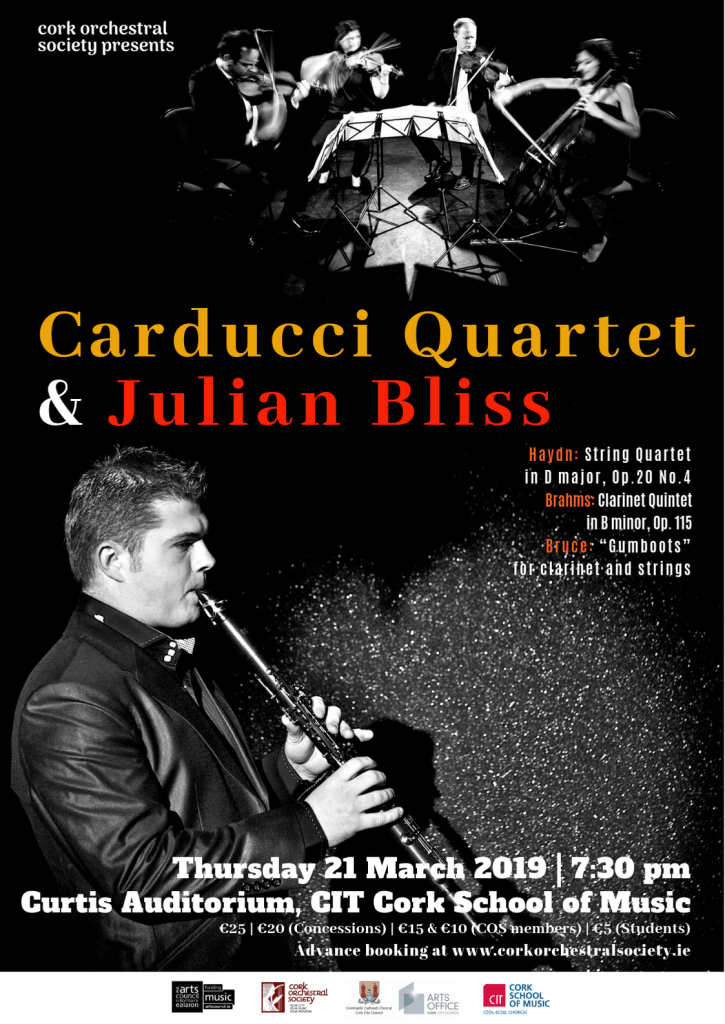