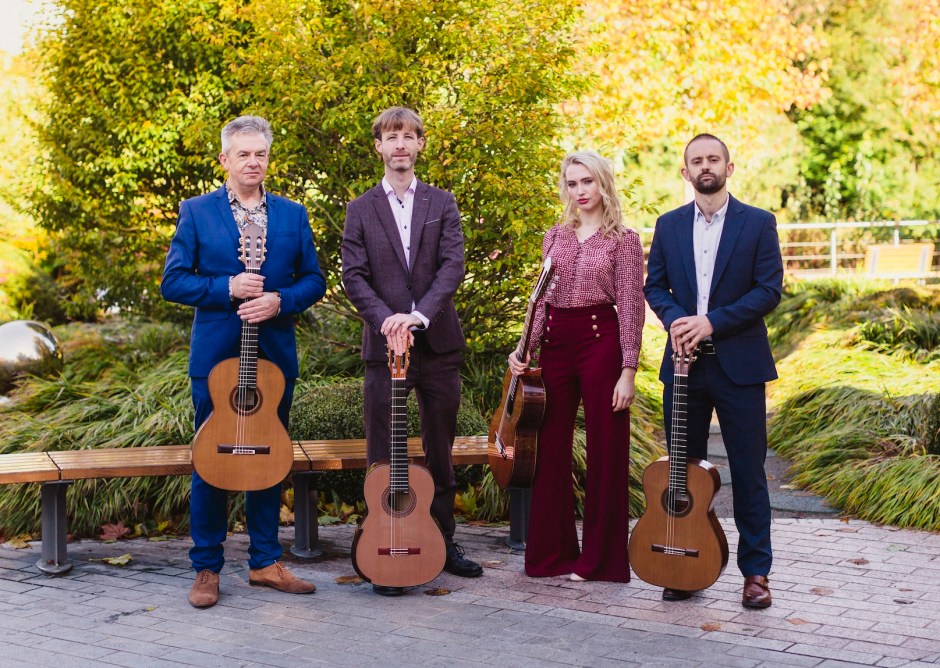 The versatile Irish Guitar Quartet is one of Ireland’s premier instrumental ensembles. Jerry Creedon, David Keating, Fiona Falvey and Aengus Kirakowski have garnered international acclaim as soloists and each member contributes towards the creation of exciting, dynamic and engaging musical performances.

JERRY CREEDON
The lrish guitarist Jerry Creedon was born in Cork and has studied guitar from a young age. After graduating from University College, Cork, he studied with the famed German guitarist Siegfried Behrend in Germany; a Spanish Government Scholarship enabled him to study at the Andres Segovia Summer School in Santiago de Compostela; the Irish Arts Council grant-aided him to attend master classes given by world-famous virtuoso John Williams in Cordoba. Jerry is the senior lecturer in classical guitar studies at the CIT Cork School of Music. He participated at the October 2001 Guitar Foundation of America International Convention and Competition in San Diego, California.
Jerry is an experienced musician and has performed in Ireland, Germany and Spain, both as a soloist and a chamber musician. He has appeared with numerous orchestras and chamber ensembles and has his own Jazz Ensemble with which he performs at the Guinness Cork Jazz Festival. He has performed at the National Concert Hall, Universities, and numerous Festivals. Jerry has recorded CDs of music by Sanz, Pujol and Villa-Lobos.

DAVID KEATING
Irish guitarist David Keating was recently awarded a First Class Honours MMus Degree in classical guitar performance at the Royal Northern College of Music, Manchester, where he studied with Craig Ogden. Previously David studied in Dublin with John Feeley and in Cork with Jerry Creedon. He achieved a First Class Honours degree at the CIT Cork School of Music, where he now teaches classical guitar.
David has won many of the important music prizes in Ireland including the John Vallery Memorial Prize in the Irish Freemasons Young Musician of the Year Competition, the CIT CSM Senior Recital Competition and the Feis Ceoil Cup and Gold Medal for Classical Guitar Performance. He has attended masterclasses with some of the world’s leading guitarists including Xue Fei Yang, Gary Ryan, William Kanengiser, and Scott Tennant. Following his London debut at Bolivar Hall in November 2013, David was invited to perform at a masterclass with the renowned classical guitarist John Williams in CIT CSM in 2013.

FIONA FALVEY
Fiona Falvey is in fourth year of the BMus degree in the CIT Cork School of Music where she majors in voice studies under the direction of Mary MacSweeney. Fiona has studied Classical Guitar with Jerry Creedon for the past four years, attaining scholarships in all her exams. She has also received Masterclasses from noted guitarists such as Nicholas Goluses and Roland Dyens. Fiona performs regularly with the senior guitar orchestra of the CIT Cork School of Music. She is a soloist and ensemble member of the CIT CSM Opera Studio Platform, performing extensively around the country in Opera festivals and private functions. Fiona is a multiple prize winner in the Feis Maitiu winning classes in Opera Arias, Opera Duets and Lieder. She recently performed in the RDS Dublin as part of the Rising Stars Concert Series. She played the role of Cherubino in CSM’s production of The Marriage of Figaro in 2014.

AENGUS KIRAKOWSKI
Aengus Kirakowski is a Cork-born guitarist and music educator. Beginning his studies at UCC, he then furthered his studies in musical performance at the CIT Cork School of Music. Aengus has participated in master classes with international names such as Johann Fostier, Remi Boucher, Xuefei Yang and Arturo Tallini in various locations around the world.
After spending a year at the Estonian Academy of Music and Theatre, studying with Estonian virtuoso Heiki Matlik, Aengus then completed his studies with Jerry Creedon in Cork. As a classical guitarist Aengus has performed at the RDS, as well as Musgrave Park, the City Hall, and participated in the Cork Jazz Festival. However, Aengus has also presented his views on the current state of music and education to the International Society for Music Education, as well as to the Society for Music Education in Ireland.
Recently awarded an MA in Digital Arts and Humanities at UCC for his research into music education, Aengus is also currently involved in various outreach projects involving other art forms – collaborating on soundtracks for up-and-coming podcasts, as well as performing his own arrangements of Irish traditional melodies and songs for The Music and Poetry of 1916.