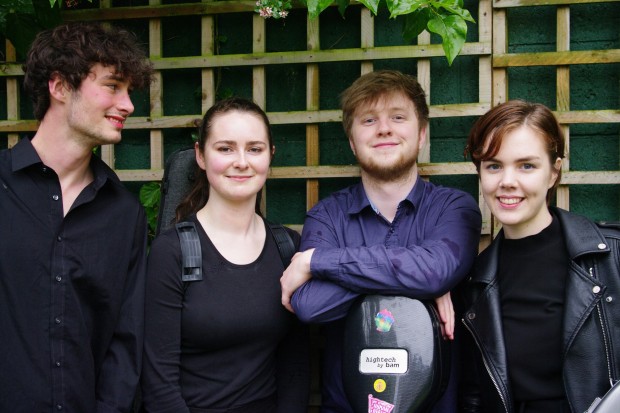 Made up of four of our outstanding young artists, the Ophelia Quartet made their concert debut earlier this summer at the West Cork Chamber Music Festival. Mendelssohn wrote his Op.13 quartet as a teenager, just a few months after Beethoven’s death, and in deep fascination with the master’s late quartets. Ravel’s 1903 quartet exudes a heady blend of classicism and exoticism which has seen it become a firm favourite amongst both musicians and audiences.

The Ophelia Quartet was formed this year by siblings Phoebe and Killian White, and their long-time friends Seamus Hickey and Colma NÍ Bhriain.

Phoebe White recently graduated with a Bachelor degree from the Jacobs School of Music, Indiana University, where she studied with Mauricio Fuks. She has a passion for chamber music, and has performed at festivals including the Ortús Chamber Music Festival, and the Clandeboye Festival.

Colma NÍ Bhriain started playing violin at the age of three. She has played in masterclasses for Jan Repko, Baiba Skride and Maxim Vengerov. She is now studying for her Bachelor degree with Thomas Klug in the Hochschule für Künste Bremen.

Seamus Hickey studies with Nobuko Imai and Marjolein Dispa at the Conservatorium van Amsterdam. A former student of Simon Aspell and Adrian Petcu at the CIT Cork School of Music, he was a finalist in the 2018 Irish Freemasons Young Musician of the Year.

Killian White studied with Christopher Marwood at the Royal Irish Academy of Music until June 2018. He recently commenced a Bachelor degree at the Barenboim-Said Akademie in Berlin, under Franz Helmerson. Killian was the recipient of the 2018 RDS Music Bursary.