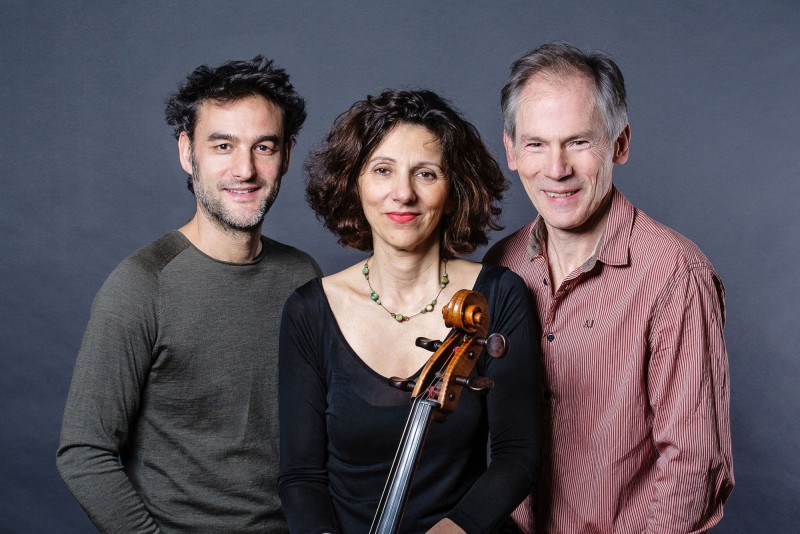 A lot can happen in a thousand years. Condensing it into just two hours might be a bit of a challenge, but Saltarello Trio step up to the plate, tracing a clear musical line from Hildegard Von Bingen to David Fennessy, taking in multiple stops along the way to admire the work of Dowland, Vivaldi and Purcell.

Saltarello Trio consists of Garth Knox (medieval fiddle, viola d’amore and viola), Sylvain Lemêtre (percussion) and Agnès Vesterman (cello). Combining their collective and vast experience of classical and contemporary music with the textures and colours of folk music, the trio fuses all three styles to inform the tour’s witty arrangements. With swirling string lines and tasty percussion to open a new window on old music, the trio proves that a good tune can speak easily to all of us, no matter what the language, no matter when the time.

At the forefront of the new music scene, Garth Knox draws on his vast experience as viola player and composer, collaborating closely with some of the leading composers of today. With Irish and Scottish roots, Knox is a unique performer taking on many different music styles, ranging from minimalist understatement to the cutting edge of new techniques and technologies. Garth has recently begun to explore the possibilities of the baroque viola d’amore in new music, persuasively bringing it to the present by creating a new repertoire for it.

An exceptional percussionist, Sylvain Lemêtre moves freely between contemporary creations, jazz, improvisation and traditional music, driven by insatiable curiosity and a willingness to experiment. Playing in ensembles of many different styles and aesthetics, Lemêtre has featured on many recordings such as La soustraction des fleurs by Jean-François Vrod, L’Ensemble Cairn directed by Jérôme Combier, Adieu mes très belles by Matthieur Donarier and Sonore Boréale, a solo album based on texts by Olivier Mellano.

Since touring with Arpeggione String Quartet for 13 years, cellist Agnès Vesterman has explored new territories playing solo works, commissioning contemporary pieces and playing with jazz and world music musicians as well as composing and improvising music for theatre and silent films. Vesterman performs the sonata repertoire with pianist Jean-François Bouvery, 20th Century pieces by composers such as Britten, Ligeti and Crumb, and contemporary works from composers including Saariaho, Sarhan, Bacri and Greif, among others. She has performed the Bach Cello Suites many times in France and abroad in unusual settings, seeking new angles of interpretation to make them more reachable for larger audiences.