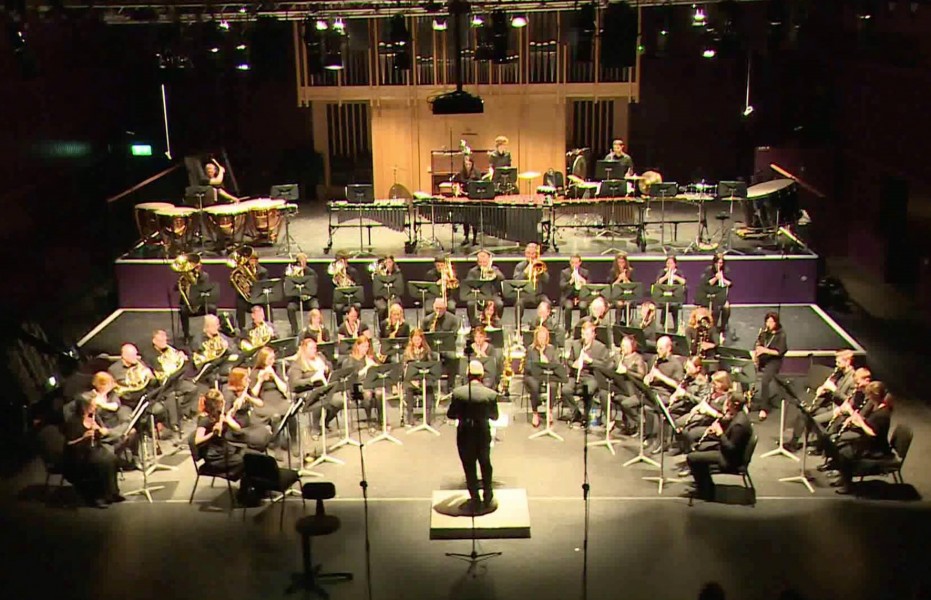 POSTPONED UNTIL FURTHER NOTICE DUE TO CONCERNS OVER COVID-19

Michael Daugherty‘s Concerto for Percussion and Wind Ensemble, titled UFO, was composed 2000 for the percussion virtuoso Evelyn Glennie. This spectacular tour-de-force for the soloist is of course inspired by the UFO culture of recent times in the United States and features multiple percussion instruments, both tuned and untuned.

The second half of the concert consists of three pieces with associations to the Royal Northern College of Music in Manchester. The first, Fergal Carroll‘s Amphion, was written while he was a student at that institution. This single movement work, taking its inspiration from Amphion, the mythological King of the Thebes in ancient Greece, takes on a very specific tonal feel from the composer’s use of the Greek modes and displays his very distinctive ear for sonority and instrumental colour.

Gary Carpenter is from and is currently a visiting lecturer in composition at the RNCM. Gary wrote Latchford Locks in 2017-18 following a commission from the North Cheshire Wind Orchestra. Latchford Locks is a continuous set of variations that references the physical and historical path of the Manchester Ship Canal. There are two basic themes and the variations first break these apart then take the form, amongst others, of a polka and a waltz before climaxing in a dance style of a much more modern nature.

Edward Gregson was principal of the RNCM from 1996-2008. He wrote The Sword and The Crown for Royal Air Force Music Services and chose to re-use material from his 1988 music for the Royal Shakespeare Company’s Plantagenets trilogy. As a result, the three movement suite has a medieval and militaristic feel throughout. A review of the first performance stated:

It is an epic piece of stirring heraldry, thick with the threats of war, approaching armies and the clash of arms. The gentle opening of the second movement with alto flute and harp was a delicious morsel, contrasting tranquilly with the stirring battle music which had listeners on the edge of seats.

The soloist Clare O’Keeffe started learning piano when she was 6 and took up playing percussion when she was 12 years old. She has a BMus and an MA in music performance from the Cork School of Music and has since performed throughout Ireland as a freelance percussionist. Clare has played with the RTE National Symphony Orchestra and still occasionally performs with the RTE Concert Orchestra. She has performed with the Crash Ensemble on a number of occasions and also with the Bangers and Crash Percussion Group for West Cork Music’s Tuning Up programme and a variety of other projects. Clare is currently a percussionist with the Army Band 1 Brigade, Cork, and performed with them as a soloist in the 2017 Defence Forces Annual Massed Bands concert.

Cork Philharmonic Winds was founded in 2012 to give Cork-based wind, brass and percussion players the opportunity to perform original music of the highest quality written for wind ensembles and bands. Since then it has built a reputation for performances of some of the most challenging music in the band repertoire while working with some of Ireland’s best wind and brass soloists.