Beethoven Reflected I – The Ficino Quartet 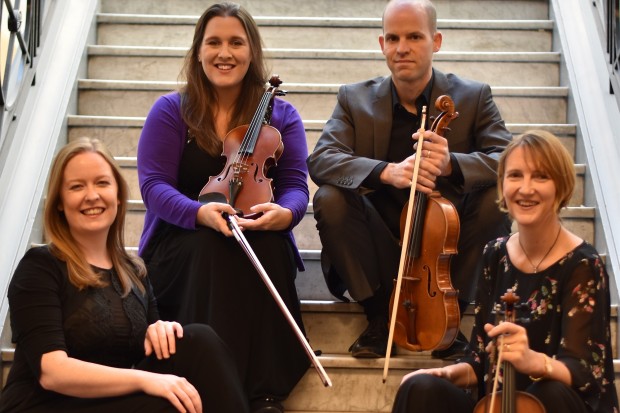 The first concert in the Beethoven Reflected series is centred upon Ficino Ensemble’s thoughtful and impassioned performance of Beethoven’s fifteenth string quartet (1825) with its famous “Holy song of thanksgiving” that opens the third movement. The first four movements of this breath-taking masterwork are preceded by specially commissioned works by Amanda Feery, Garrett Sholdice, Cora Venus Lunny and Benedict Schlepper-Connolly.

A new, seamless whole is formed. The new works sit out of time, resonating in sympathy with the Beethoven quartet; refracting and reflecting its light; suggesting a multiplicity of connections, both internal and external.

Amanda Feery’s new piece opens the concert, tracing over faint grainy remnants of the Beethoven quartet – an archaeology of sound, emotion and meaning.

“The Secret Cause”, Garrett Sholdice’s interlude between first and second movements, meditates on Beethoven’s “Heiligenstadt Testament”, written some two decades prior to the fifteenth quartet, in which the composer expresses despair at his growing deafness, his growing isolation.

Cora Venus Lunny’s new piece, “Theft”, precedes the third movement and its famous opening “Heiliger Dankgesang” hymn. “I wanted to go to some deep and even unpleasant places,” she says, “in order to appreciate the light of Beethoven’s gloriousness even more and be lifted up.”

In “Foreign Hand”, Benedict Schlepper-Connolly gently sustains the rich sonorities of the third movement – an extended moment of repose before the final tour-de-force of the fourth and fifth movements.

Formed in 2013, The Ficino Ensemble have been committed to exploring the vast chamber music repertoire and presenting thoughtfully programmed concerts. The group regularly perform as a string quartet, and the addition of winds and percussion gives the possibility of playing large-scale chamber works. The members share a dedicated approach to contemporary music and have been invited to play as part of Moving on Music in Belfast, where they performed works by John Buckley, Anselm McDonnell and Ian Wilson. In 2019 they collaborated with several composers of the Irish Composers Collective, where the musicians worked on pieces with the composers and premiered several new works for flute, harp and viola. Ficino Ensemble was recently joined by the Con Tempo String Quartet in a performance of works by Brahms, Mendelssohn and Enescu as part of the Dublin Enescu Festival. In 2018 they performed a concert with Olwen Fouéré as part of MusicTown in Dublin, which included a performance of Thomas Ades’ Four Quarters and Ludwig van Beethoven’s String Quartet Op. 132. Their debut recording Winter, released on the Ergodos record label, has received critical acclaim and has put them at the forefront of the Irish chamber music scene. Ficino Ensemble takes the name from Marsilio Ficino, the Renaissance philosopher who regarded music as a “contemplation of the divine”.